In August 2018 we made the questionable decision to move to Leicester for a new set of jobs. Part of our agreement was that we should rent a 2 bed house, and that the larger room be turned into a training room in lieu of access to a wealth of London climbing gyms.

Having built a small board back at my parent’s house a few years ago (inflicting untold stress on them by drilling ruddy great holes in the the walls) I was obviously the pro, and relished the challenge to mangineer a new training board.

The requirements were as follows:

I had the idea and raided Wickes for 18mm ply and 4m beams, and got to work. Times like those are when I’m so glad to own a big car.
I planned for this to be a very simple build with minimal cutting, I’ve not got any power tools other than an impact driver so sawing is a hassle. A simple build is actually what I got!

A large square composed of 8 610x1220mm ply panels screwed onto a lattice of 45x70x2400mm and 45x145x2400 C16 timber beams set at 20 degrees (for now) and suitably supported. I then extended the right side perpendicular to the board to facilitate hanging both BeastMaker 1000 and 2000 fingerboards complete with pulley set up. KTX Silver M5.0 50mm and 120mm screws were used – good enough for most climbing centres, good enough for me!

The Core Screw-On board footholds are excellent and force the accurate footwork required for hard climbing, it certainly takes a bit of getting used to; an aggressive pair of Scarpa Instinct slippers help.

Being a furnished house we had a spare double mattress once we’d disassembled the bed to make space, perfect pad for the training board. 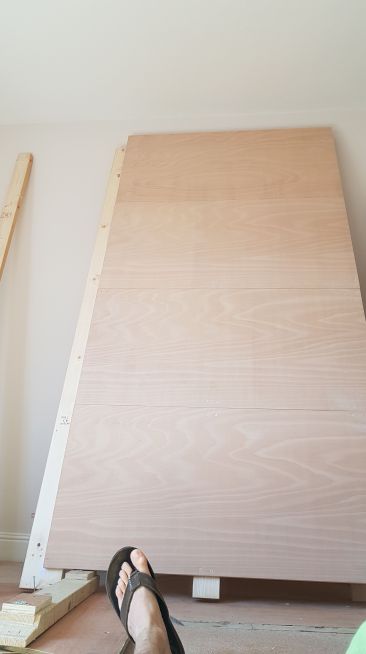 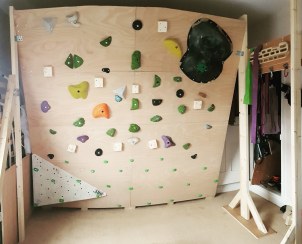 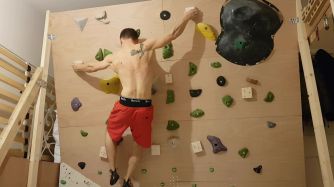 The hold selection is a random assortment from Surrey Summit so if any lovely hold manufacturer wants to lavish us with gifts please feel free – we’ll advertise the hell out of it for you!
We just need some free weights and we’ll be fully set to get stronger and starting achieving our goals.

Now unless you’ve lost their newest bit of trad gear or run off with their spouse the answer will most likely be a no. Thankfully the vast majority of the roped climbing world is relatively switched on and can tell the difference between the dead rope, their pocket and their right nostril – places you’d most likely find their hands!

Having spent a full year working in a climbing centre environment I see bad belaying on a daily basis and it scares me, it should scare you too: Complete novices, performance squad, old boys, your mate – bad belaying can be found everywhere. It’s a rampant problem that needs sorting before more tears are shed, legs are broken and climbing careers shattered.
In the last month 3 belayers have been intercepted by myself or a colleague and the climber given an ear bending for attempting to have a novice belayer (first time ever in a climbing centre) keep them safe on the wall – this is after strictly being told that they cannot belay without supervision.

First and foremost if you are bringing a first timer to a climbing centre or outdoor venue you are not allowed to have them belay you unsupervised. They are first timers and will probably have no idea what you’re talking about. In all good judgement you can not put your life in their hands; regardless of how good a climber you are, if you fall they probably won’t catch you.

A common reply, accompanied with an almost offended look, is simply “But I’ve always belayed like this” or “Don’t worry mate, I’ve never dropped anyone“. What, you’ve always belayed without actually holding the dead rope in the locked-off position? Or always held the rope with the lightest of thumb and index finger ‘fairy pinches’? Poor form Mr/Mrs belayer. Poor form. In climbing instruction we work in what ifs – You may be fine now, but what if…?

My teaching style for belaying is through this rhyme:
Eye
To the Thigh
1
2
3
(Count in German to make it rhyme!)

The reason I teach this way is because with the usual V-Knee-1-2-3 I find that most belayers end up bobbing up and down as they belay, constantly touching their knee with the dead rope hand. Highly amusing for me, but complete waste of energy!

There are plenty of other iterations of the rhyme; V, Knee, 123 – Up, Down, Left Right Left – etc. but they’re all describing the same movement. Starting in the neutral position where the dead rope (DR) hand is at hip level and live rope (LR) hand  is at chest level, the DR hand comes up to form a V shape in the air pulling through approximately a foot of rope, the DR hand brings the rope down into the locked off position, LR hand comes down above the DR hand, DR hand now goes above the LR hand, LR hand goes back to the live rope, repeat until climber reaches the top. Using this routine there is always a hand on the dead rope and the rope is in the locked off position the majority of the time ready to catch any falls. It is worth noting that this method is suited to modern friction plate devices such as the Petzl Verso and DMM Bug, and not italian hitches or belaying in ‘guide mode’.

Safety offences I’ve called people out on include:

Climbing is an amazing sport that everyone should fully embrace, or at least give a go. It must be kept in mind that while the sport is becoming increasingly accessible through the rise of indoor climbing centres and availability of outdoor instructors and guides, it is still classed as an extreme sport – if things go wrong, they’ll go wrong quickly and in a big way often resulting in injury or even death.

Ensure your belayer knows what they’re doing before trusting them with your life, it’s really not worth the risk!

A British stigma is to see a wrongdoing, tut and mutter about it, but not actually act on it. This is just as true in climbing as it is seeing a dog walker not picking up their dog’s fresh turd. If you see something that worries you or is dangerous then tell a member of staff!